13 Differences Between Knitting and Crocheting

You crochet with a hook and the only difficulty is to find one that gets you the gauge your pattern asks for. Typically the thicker the yarn the bigger the hook and vice versa. Of course, there are hooks made of different materials and they have different shaping but those factors are a matter of taste.

For knitting you need 2 to 5 needles. There are several types of needles such as straight needles, double-pointed needles, and circular needles. The choice of needles depends on your project and preferred knitting method. Similarly to hooks, the thickness and the material of the needles vary. Also, typically bigger needles are used to knit thicker yarn and vice versa.

You can also both knit and crochet with your bare hands if your yarn is thick enough.

You can crochet with one hand only even though it’s easier with two hands but for knitting, you need both hands. In knitting, there are several ways you can hold your yarn such as continental, Norwegian as well as English styles. In crocheting, most people seem to hold the yarn and the hook the same way.

3. The number of live stitches

A live stitch means a loop of yarn. When you crochet you typically have only one live stitch at a time whilst when knitting you can have anything between one and several hundreds of live stitches.

4. Look and feel of the fabric

The basic knitted fabric is called the stockinette stitch. It consists of little v-shaped stitches stacked onto each other. With knitting, you can achieve lighter, softer, and more drapey fabric than with crocheting. Crocheted fabric is usually stiffer and heavier.

Typically if you knit something you work it either back and forth from one end to another such as with scarves or then you can work in the round such as with hats or socks. In addition to those previously mentioned directions in crocheting it is quite typical to make squares or rectangles and start the making from the center of the piece (you’ve probably heard of granny squares). Working this way is possible in knitting as well but is not used very often.

In crocheting, you have basically two ways to start a project: you either crochet a long chain of stitches, or you create a magic ring into which you crochet some stitches and then pull the yarn tight so that the hole in the middle closes.

In knitting, there are numerous ways to cast on and you can choose your method based on how stretchy or decorative you want your cast-on edge to be. In fact, the two methods used in crocheting can also be used in knitting.

As a rule of thumb, one could say that producing a similar-sized item with crocheting eats up more yarn than with knitting.

Here in Finland, the first thing kids are taught to do at school is to crochet because there’s only one loop of yarn you need to worry about at a time. However, when making more complex projects I find knitting easier because it’s easier to count the stitches and follow the pattern. Sometimes I find it a bit hard to understand how should I count my stitches or where to place a stitch when crocheting complex projects.

In knitting, there are quite a limited number of stitches and techniques that can be used to create and shape the fabric. In crocheting, in my opinion, only imagination is the limit. Take a look for instance the pieces of Kalevala blanket I made (the pattern of the blanket is available for free).

You can both knit and crochet many kinds of projects from socks to potholders and garments as well as toys.

I prefer to knit my clothing because that way they tend to be more lightweight and pleasant to wear. Things such as toys (amigurumi), potholders, and handbags as well as stunning blankets I love to crochet. This is however my personal preference and as said before you can also crochet your clothing or knit toys.

13. Can machines crochet or knit?

There are machines that can do the knitting for you but crocheting can only be done by hand (as far as I know). This is the main reason that commercially produced clothes are knitted not crocheted. 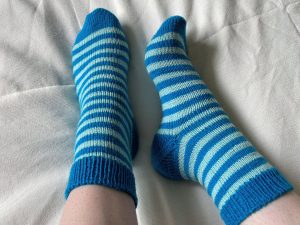 How to knit socks step-by-step 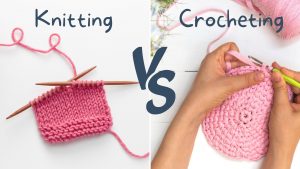 13 Differences Between Knitting and Crocheting